Eating in the presence of others, whether with friends or family, can create significant stress for someone with specific and limited food preferences.  Rhiannon, an adult picky eater, was kind enough to speak with me about her coping strategies with social eating. 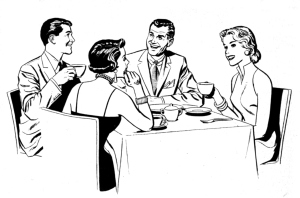 What is it about eating socially that makes it more stressful than eating alone?

Well, first off, there’s the physical reason:  if I’m out of the house for hours, I’m probably going to be hungry at some point.  I’m always worried that I won’t get enough to eat when I’m out because there won’t be enough foods there that I can eat.

Biology aside, however, I’m usually a little anxious when going out because not eating (or not eating as much as everyone else) at a gathering invites a lot of social problems.  Food is a method of social bonding, and not eating the food that’s in front of you is seen as a rejection of the people around you.

It can also be difficult for people to separate “wanting to spend time together” from “eating together,” especially if the social outing is long enough to include a meal. Plus, there’s a social rule that says that it’s rude to eat in front of someone who isn’t eating, and so many people feel intimidated if I’m finished with my eating long before they’re finished with theirs.

Has eating with others always been difficult?

Social eating has always had a lot of issues for me.  When I was in school, even my friends would ask, with a disgusted look, “You like that?  That’s so boring!”  Telling people that I had food issues didn’t work; it just pointed me out as someone “different” (which, to the other kids in school, is almost always a bad thing.)

Back then, I didn’t have a good description of why things tasted different to me; no one knew the words “super taster.”  My parents and I had constant fights and struggles over food.  They just didn’t understand why I wouldn’t eat something that was “perfectly good.” I got punished for not eating, and was forced to eat the food I didn’t want for dinner, for breakfast.

That being said, my parents are wonderful, loving people who would never do anything to hurt me on purpose.  Their behaviour came from ignorance only, and if they’d known then what we know now about food and eating, I can guarantee that my experiences would have been much more positive.

What strategies to do you use to cope when you are invited out to eat?

When I’m invited out to a restaurant, it’s an easy social situation.  I love the internet; if I’m going out to eat in an unfamiliar restaurant, I can often look up the menu online and decide which thing I’d be most comfortable eating beforehand.  I try to leave myself a few choices if I can, even if it means saying to the waiter “I want this meal without the sauce” or “I’d like this meal but without the coleslaw.”  A restaurant is one of the few social times wherein it’s okay to have your meal prepared specially for you.  Everyone is (usually) ordering something different anyway, so it’s no big deal to ask for your food the way you want it.

When it comes to social eating, different rules apply to different situations.  Being a guest in someone’s home is very different than a restaurant. What challenges do you face as an invited guest?

It’s much harder for me to go to someone’s house to eat, for a whole list of reasons.  Usually, the host has prepared a dish (or many dishes) to suit what they think everyone will like.  Often, though, I’ll look at a buffet table with three finger-food appetizers, five salads, two main dishes, two side dishes and a basket of buns, only to discover that I can’t eat anything there except one finger-food appetizer, one garden salad (which may or may not be ruined by someone coming over and pouring dressing all over it before I get a chance to take some) and the buns.

Now, what do I do?  I can’t just go up to the host and tell them I can’t eat their food; it’s insulting.  At best, I’ll be asked about allergies, and since I can’t claim to be allergic to everything on the table, then my reason for not eating isn’t “good enough.”

Socially, I’ve often been seen to be “causing trouble” or “just wanting attention.” It’s a hard place to be in, because even if I don’t say anything, someone is bound to look at my plate and remark, “Aren’t you eating?” Then the host will come over, concerned, and ask me why I’m not eating, thus drawing the attention of anyone who happens to be standing near.

Not answering that question isn’t an option, either.  The more silent I stay, the more people get concerned about me being sick.  Even if I just lie and say “I’m not hungry,” I often have to provide a good explanation as to why.  And if I tell the truth (that I can’t eat most of what’s on the table), I’ve now both offended the host and convinced anyone standing nearby that I’m a very weird person or (more likely) that I’m creating drama for no good reason.

Is there a solution to this?  I wish I knew of one.  If I eat beforehand and come to the party genuinely not hungry, I still have to explain why I’m not hungry.  And don’t ever tell a host that you ate before their party, unless you want to offend them even further by insinuating that not only is the food they’ve prepared no good, but that you didn’t even have to see it to know that their food was no good, and thus you ate beforehand.

Saying “I’m a picky eater” doesn’t really work well either.  Then it becomes a challenge:  find something that is currently sitting on the table that Rhiannon will eat.  She must eat something, and it must be enough to fulfil the requirements of a full meal.  It ends with me having to explain specifically about each and every dish why I won’t eat it, and coming off to everyone standing nearby and listening as a person who’s just trying to get attention for themselves/being a drama queen by being overly picky.

In the worst-case scenario, the host will open their freezer and ask me to find something I can eat, and then if I find anything, insist on making it for me.  That makes the whole situation worse, because now people who weren’t a party to the first conversation will be asking questions like “I thought you were finished cooking?”  And the host will explain to everyone in the room that they are making something special just for me, to which everyone will silently add “because she made a scene.”  I’ve even had people say to me “Why did you make such a big deal out of it?  Just find something that’s there and eat it.  It’s rude to make people cook special food just for you.”  Which of course I know, and I didn’t ask anyone to do anything special, but no one will believe me at that point.

The good news is, the worst-case scenario rarely happens.  Usually, I come to a party expecting to eat a snack instead of a full meal, and make sure that I have food at home that I can eat afterward.

When it comes to navigating the buffet table, I’ll wait until everyone else has had a chance to eat first, then pick at whatever’s left, if anything is left, of the foods I can eat.  People have come to think of me as “not hungry” all the time, because that’s the safest excuse I can provide.  I make a point of finding something cooked that I can eat, though, even if it’s just one finger-food appetizer.  I then eat the cooked food in front of the host, so they won’t feel insulted by my not eating anything they’ve prepared.

It must get tiresome always having to defend yourself from the perceptions of others. What strategies do you use to pass for a ‘normal’ eater?

As for explanations, I stick with “I’m not hungry” and compliment the host on the one cooked food I could eat.  I tend to fill up on drinks, even going to the kitchen and getting water repeatedly, so that my stomach feels fuller for the duration of the party, before I can eat my meal at home.  My excuse is that I’m part camel, and can drink a ton of water every day.  (That excuse happens to be true, so I use it often.)

If the situation is a potluck, I always sign up for either the main course or a side dish.  That way, I know that I can at least eat the food I bring, and it’ll be more filling than the usual fare.  If I can, I also bring my own platter of fresh veggies, with dip being optional, so that I know I can have some vegetables with my meal.

If the situation is a sit-down meal, it can be harder, because people will be constantly passing me a plate of something I can’t eat, and watching me pass it on without taking anything.  “Aren’t you eating?” comes up again, only this time the entire table has heard it.  I usually head this off by picking something that I can eat, and saying “I’m waiting for the (insert name of food here.)”

Can you tell me about a time when you had a good experience with social eating?

When I was 17, I went away to a camp for people who were visually impaired.  It was the first place I’d ever been to that seemed to understand my preference for plainer foods.  As an example:  one night we had spaghetti for dinner, and the tomato sauce was not automatically mixed in with the noodles.  Instead we were given a choice as to how we wanted to eat our pasta – with sauce or without, with butter or without.  I chose butter (I’ve always liked buttered noodles, before that phrase became known), and was not made to feel at all like my food choices were strange.

Is there a way the host might serve a meal that helps you feel more comfortable?

Sometimes, a sit-down meal will actually have more foods that I can eat, because the foods that are served are different.  Rather than lasagna and casserole being the only choices, a roast with potatoes is more likely to be on the menu.  And since people tend to add their own sauces (gravy, cranberry sauce, etc.) to the meat after they’ve taken it, I can take just the plain meat without drawing attention to myself.  I usually try to sit near the garden salad too, so that I can take some before anyone pours dressing on it.  I’m also lucky that there are a few “staple” sides (things that are likely to be served) that I like, so I can usually take at least one of them.  My plate may not be as full as everyone else’s, and I may still be hungry afterward, but at least I don’t get the same amount of questions about how much I’m eating, because I’m able to eat more than usual.

Do you have strategies to make social eating a more pleasant experience? Share your ideas in the comments.