It was my birthday recently, and as a treat, Hostage Dad suggested food from The Mandarin (a local Chinese restaurant). We ordered in, because while we stopped to celebrate yet another successful trip around the sun, we were also painting both of the kids’ bedrooms. In the midst of paint cans and roller trays, cooking was not high on the list of priorities, but eating certainly was!

The Mandarin’s portions are generous enough to feed our family of four several times over, and the containers are handy for storing left-overs. All in all, good bang for a buck.

We all sat down to dinner, and I laid out the variety of delicious food on our lazy susan. Mandarin food is something my son has seen many times, but never eaten, so I added some leftover lunch options for him. He won’t eat sliced bread from a loaf, so the first of several meals included french fries and pizza.

As I laid out the food, I noticed TJ looking with interest at the different dishes. That has never happened before! I know he worries about disappointing the adults in his company, me especially, so I wanted him to know that whatever he wanted to do with this meal was his choice, and he had my blessings. Content with permission to explore at will, TJ devoured half a dozen fortune cookies.

Gently testing the waters, I asked TJ which of the 5 bowls on the table were the most interesting to him. While he pondered, Hostage Dad prodded with a hypothetical scenario where we were trapped on an island and this food was all there was. Seeing TJ’s eyes grow a little wider, I countered by suggesting that if TJ was going to sit in front of a selection of food, it was only fair that the bowl he is most interested in is closest to him. He relaxed and chose the noodle dish. He didn’t take any, but in making that decision, he had a good look at all the options. The most impressive part of this whole exercise was TJ’s ability to remain calm and matter-of-fact about the food placed only inches beyond his plate. 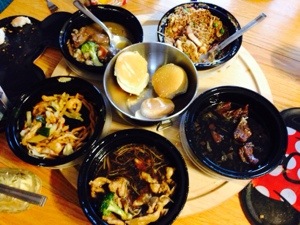 Our second dinner (photo above) included mini hamburger buns with a side of butter.

Lately, I’ve been wondering if TJ would be able to manage the occasional meal of available food without the safety net of his familiar food. The line between catering and considerate meals with a selective eater is extremely fine, and I wonder how close I am to crossing it when options that are appropriate for TJ have nothing in common with the meal on the table. I know better than to take safe food away, but at the same time, I would like to see him perhaps making a decision based on some actual gustatory input.

And then I came to my senses. The problem with that idea is my agenda to increase dietary variety in another individual. What I want has little, if anything, to do with what TJ wants, or is even ready to do. Pushing my wants onto my son’s eating is a sure-fire way to send up an insurmountable wall of resistance and undo all the progress we’ve made.

For our second meal of Chinese take away, TJ helped himself to several of the mini hamburger buns, and again, he declined servings of everything else.

Progress with extreme food selectivity can be very difficult to see. If I mark progress by increases in dietary variety, I will be disappointed. Looking at progress in terms of attitude is more realistic and ultimately, more beneficial for all concerned. Building trust takes a really, really long time, and fates willing, we have plenty of that.

Our ladder to increasing food acceptance looks like this:

There are many meals ahead of us yet. Before TJ ventures into the realm of the unfamiliar, he has to see eating as something he enjoys, and something that doesn’t threaten his personal safety. Every small step is progress in a positive direction. 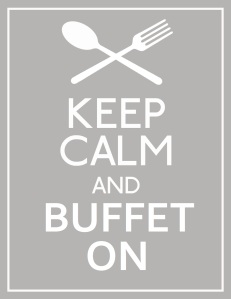 As dinner is winding down and we prepare to tidy up, TJ asks, “Mom, can I have a sip of your beer?”

Of all the things on the table, what is it that makes my beer so enticing? It’s not ever been forbidden, although it is an unusual dinnertime beverage. He took a small sip from the bottle, and promptly made a face of disgust. It was no big deal, after all, I will never expect him to like everything he tries. 😉

(By the way, the kids’ new bedrooms look amazing.)

3 responses to “Stowing The Feeding Agenda”