When we first bought this house, the unfinished basement was home to a variety of spiders.  Somewhere in the expansive realm of Google, there is a documented fact that the average human is never, at any time, more than four feet away from a spider.  No need to thank me for that comforting little bit of information.  I, personally, can function quite adequately with a spider hiding four feet away from me.  That all changes, however, when they get up close and personal.

Like the day I was working away at the computer and a spider decided to investigate the space inside the back of my shirt and settled into that coveted spot that nobody can reach with their own arms.  There was a lot of screaming. And wild flailing. And record setting clothing removal. The spider didn’t survive.  I fared just barely better.

Soon after my harrowing ordeal, I read a status update about a friend who frequently finds black widow spiders inside her house.  She mercifully and gently collects them and returns them outside, unharmed.

So I thought it could be educational to choose two feeding strategies we have tried and apply them to my selective eater.  Not for the intention for saying one is better than the other, instead, as in the case of my friend and I and our different reactions to spiders, to examine why one style of feeding advice may be more successful for us in particular than another.

For this challenge, I’ve chosen Karen Lebillon’s “French Kids Eat Everything” only because these are the mealtime directives that I grew up with.

My mother’s maternal grandmother immigrated from France after marrying her Canadian husband.  These rules have been passed down through my family’s line of moms for generations.

I’m pitting what I grew up with against a radical change in thought about eating in general.  Ellyn Satter’s Division of Responsibility is quite possibly the most widely misunderstood information I’ve ever come across, probably because, as Ellyn puts it, “this doesn’t exist in a bubble.” Routinely, I come across barely recognizable fragments of the original intent. For example, as one parent explained the Division of Responsibility to me, “my son would not eat vegetables until he was in his teens.  When he was younger, I served vegetables with every meal beside a pureed vegetable soup.  If he chose not to eat his vegetables, then he had to eat the soup. It was his choice, but he had to choose one or the other.”   The DoR is not so much an absolute set of instructions as it is a clear definition of who is responsible for which part of the eating experience. 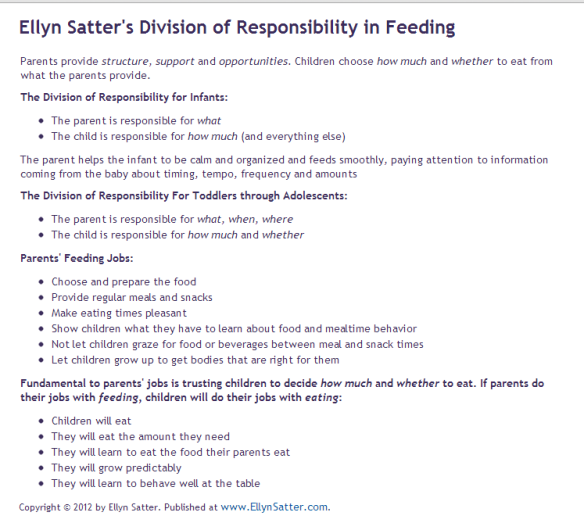 Both Lebillon and Satter agree on the parents’ responsibility to provide opportunities and structure at mealtimes.  Neither method disputes the importance of eating together as a family, having regular, predictable mealtimes or allowing a little hunger to build between meals and snacks in anticipation of the next eating opportunity. Both methods recommend approaching mealtimes as an enjoyable experience, slowing the eating experience down and removing stress from the menu.

Lebillon stresses the importance of food education. “The French believe that teaching a kid to eat is just as important as, and just as time consuming as, teaching them to read.” explains Lebillon.  “When you teach a kid to read, you teach the alphabet, then words, sit with them, read with them. The French feel that way about eating. They have a long-term view. They also don’t get frustrated when there are bumps in the road. Some kids take longer to read than others, but they don’t give up and say “This kid is a picky eater, she just doesn’t like broccoli.” You don’t treat fear of foods as a personality trait, you treat it as a phase.”

Learning to enjoy a wide variety of foods takes time and the French approach eating as a skill that is acquired with practice.  When a child balks at the strong taste of something new, the French approach is to reassure that it’s okay to not like the flavour today, but as a child grows and their sense of taste matures, that same food may be enjoyed when they get older.

I can get on board with the French approach of “You Don’t Have To Like It”, but we get thrown over the side with “You Have To Taste It”.  I am genuinely curious how Lebillon proposes I should accomplish this?

In my house, getting to that inaugural taste experience is an impassable hurdle.  I have a child that not only does not like broccoli, but any vegetable, all meat, and all but a handful of locally grown, fresh, in-season fruit. This “phase” is going into it’s 6th year.  Demanding of my son to “Eat Your Vegetables” is as futile as expecting me to spontaneously grow another two pairs of arms (which, by the way, would be an incredibly useful evolutionary development).

Lebillon believes that after several exposures, (somewhere between 10 – 20), a child will become more comfortable with a new food.  When the request to taste is refused, “the French would say take it away cheerfully, tell them to enjoy their next meal, and that will be scheduled in a few hours. I always put things I know they like on the table, then there’s a new food that appears. OK, they’re interested but not sold, we’ll try it again next week. Don’t build it into a battle of the wills.”

It takes TJ, on average, about 300 exposures before he is ready to taste a new food.  According to Lebillon, it is theoretically possible to expand his diet beyond the 12 individual items (17 if I count items I can mix into a smoothie or a pancake) he will currently accept.  Whoops, make that 11.  We recently bid a (hopefully temporary) farewell to strawberries.

Satter, on the other hand, focuses on developing a healthy relationship with food.  She is less concerned about what is being eaten, and stresses focusing on how parents feed their children.  “Today’s parents feel obligated to get their child to eat certain foods and grow in a certain way. They learn it from health professionals, family, and each other.” Rather than insisting parents encourage their child to eat their vegetables, Satter recommends granting the child complete freedom to explore the available selection of food. “Let your child have seconds of something before finishing firsts on something else. Until they get quite a bit older (and maybe not even then) children don’t know what they want to eat until they taste it.”

The DoR puts how much of any available specific food item will be eaten squarely on the shoulders of the child without any pressure to taste anything.  If TJ wants to fill up on one particular item, he should have full permission to do so, as well as the same permission to decline servings of anything he is not comfortable eating.  He can still see the other foods. He can interact with unfamiliar items by helping to pass bowls to other family members and smelling what’s in them as they move from person to person.  This exposure at a safe distance qualifies as “trying” something new and slowly ticks away at the hundreds of exposures he requires before he’ll consider willingly ask for a taste.

Eventually, TJ may choose to try something he hasn’t before, but not until he is ready to do so.  Keziah, an adult who has been a selective eater since childhood, explains how any form of pressure can add to the anxiety already experienced at the table.  “If people are trying to persuade me into trying something, chances are I will shut down and politely refuse. I’m much more likely to try something if I can casually put a small piece on my plate and take a bite when no one is watching.”

There is nothing wrong with either of these strategies.  Both acknowledge that using  pressure to expand your child’s diet is ineffective. The DoR puts how much should be eaten in the child’s control and acknowledges that there will always be disliked food, where Lebillon gently insists on repeatedly tasting food until the child learns to like it.  Lebillon’s gentle “you have to taste it” approach would be well received with my adventurous eating daughter who doesn’t like everything she eats.  Using the same technique on my son would create a disastrous meal.  Satter’s method clearly defines our respective responsibilities, and has helped every member of this family (cook, selective, adventurous and dieting) feel better about eating in general.

Consider these two strategies the context of my selective eater.  If you were asked to swallow a live black widow spider, would you be excited or nervous? Would you do it just because you were hungry?

Would you do it for money? A sticker? A chocolate chip cookie?  Probably not. You would, however, need to be certain that eating the spider would not hurt you.  (Both Lebillon and Satter discourage the use of food as a reward or bribe.)

Would you like to have an alternative option available, in case you just couldn’t eat the spider? Would it be comforting to know that another eating opportunity, one that doesn’t include arachnids, is just a short time from now?

This is the level of anxiety we face at every meal.  TJ is not any more likely to eat a black widow spider than he is to take a bite of broccoli.  Insisting he does either will elicit the exact same response.

Whether one of these two strategies, or something else, works for your family depends on the temperament and eating competence of the people in it.  I may not be able to transform my selective eater into an adventurous foodie, just as there is no one-method-fits-all solution that encourages a selective eater to try something new. I can help TJ relax around food by being patient, predictable, and supportive. I can help TJ develop a healthy relationship with food by encouraging him to enjoy the foods he can tolerate and not pressuring him to eat a wide variety of foods.  From personal experience, removing all forms of pressure from the eating experience has made all our meals a much more enjoyable experience for everyone.

Even in the nearby proximity of spiders.

9 responses to “Learning To Enjoy Eating (Even With Spiders)”